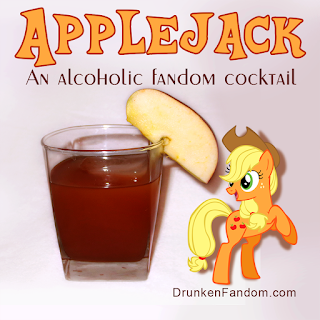 There's nothin' quite like apple cider, lovingly brewed from the best apples on Sweet Apple Acres, and this here ginger apple cider cocktail reflects that. It might take a little work to get it all started, but trust me, y'all, it's worth it. Start out by thinly slicin' your ginger, and combine it, a cinnamon stick and your apple cider into a small sauce pan. Heat all that up until it's boiling. Turn off heat and let it sit for ten minutes, to let it all infuse. Remove the  ginger and cinnamon sticks and refrigerate until your cider's cold. In a rocks glass with ice, combine your cooled apple cider with your apple brandy, and stir to combine. Garnish with  an apple wedge or one of those little cinnamon sticks, if y'all desire. Be sure to make enough for all your friends, now!