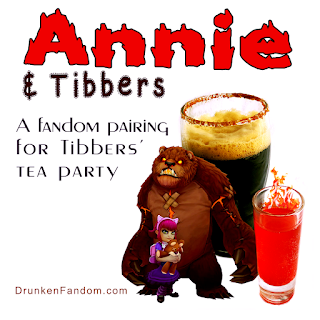 Sometimes you need a break from the Rift, and you may just need something a little stronger than what Tibbers is serving at his tea party. Give this Annie & Tibbers pairing a try, it's just as good in real life as in League of Legends! Make your own cinnamon soda by combining equal parts of cinnamon candy and water over medium heat. Stir until candy has dissolved or mostly dissolved. Discard any remaining candy and refrigerate the syrup. Coat the rim of a pint glass with cinnamon, spice and everything nice--or more accurately, a mixture of brown sugar and cinnamon, pour chilled beer. In a shot glass, combine cinnamon candy syrup and club soda. Alternate sips, but do not combine! Just like in the game, Annie and Tibbers are much more potent when they are separate entities.

Annie doesn't mess around, so make her even more of a threat with real fire! Pour a few drops of 151 on top of the shot and use a candle lighter to ignite. Keep your guests safe and use the proper precautions, and never consume a drink while it is still on fire. Turn down the lights to best see the blue fire, be warned that 151 burns faintly and may be difficult to see in a bright room. Sprinkle with cinnamon for more aggressive bursts of flame!

Make it a Mocktail:
Annie is delicious and alcohol free, so long as you don't add the real fire element. Skip the stout and pour a great big glass of root beer to make Tibbers a kid-friendly treat.

Makes:
One pint and one shot