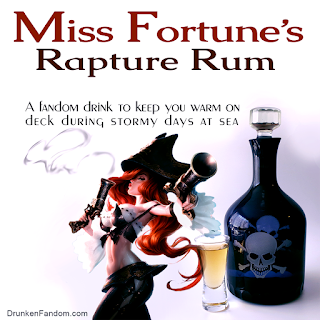 Fancy a bit of celebrity without spending a fortune? Then give our bootleg Miss Fortune's Rapture Rum infusion a try! Just don't tell her we're handing out this recipe, we don't want to end up on her list. Combine vanilla, cinnamon and peppercorns in an empty bottle or jar, along with half of your rum. Seal and allow to sit for 2 to 4 days, giving the container the occasional, gentle shake. Once the brew has turned golden and developed pleasant aroma of vanilla and cinnamon, strain and combine the infused rum with the remaining silver rum. This infusion won't be as diamond clear as the original, but it will delight any sailor with its spicy warmth. Sip between bites of your favorite tropical fruit or, if you are brave enough, try throwing back a shot or two!