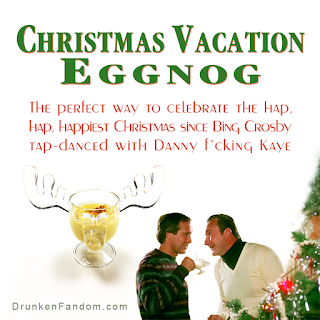 Nothing says Christmas time like eggnog, and this recipe is intended for those who aren't satisfied with scrawny, dead, overpriced 'nog that has no special meaning. Yeah, sure, it's a lot of work, but you want something you can be proud of, don't you?  Kick off your fun, old fashioned family Christmas by using a mixer on low speed to beat the egg yolks, gradually adding ⅓ cup of sugar, then set aside. Combine milk, heavy cream, cloves, half of your vanilla and cinnamon stick into a sauce pan. Heat on low for five minutes, then raise temperature and bring to a boil. Remove from heat, strain out cloves and cinnimon stick and slowly stir the mixture into the whipped egg yolks.

Pour everything back into your pot and cook until it reaches 160 degrees F. Remove from the heat and move to the refrigerator to cool. Use your mixer to beat your egg whites until they form soft peaks. Keep the mixer running and add 2 tablespoons of sugar, continue to beat until the peaks are stiff. Once it has cooled, remove the eggnog from the fridge and whisk in your egg whites, followed by bourbon and rum.

At last, you're ready to celebrate the season, and this recipe is sure to turn you into the jolliest bunch of @$$holes this side of the nuthouse! We recommend demanding a drumroll before serving in these delightful moose mugs. Top it off with nutmeg or cinnamon and enjoy. Merry Christmas--hope your shitter isn't full!

Make it a Mocktail:
It's easy to make kid-friendly eggnog, make as directed, but skip adding the bourbon and rum.