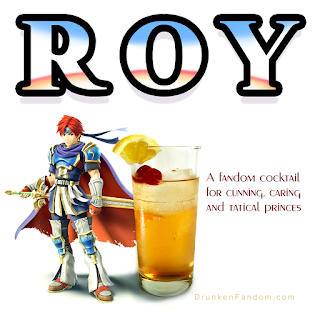 Can't decide between spicy and sweet? Make the cunning choice and enjoy both with our Super Smash Bros and Fire Emblem inspired Roy cocktail. Ginger spicy and refreshingly sweet, you don't need to be a master tactician to make this simple beverage. In a collins glass with ice, combine cinnamon whiskey and ginger ale. Give it a lemon wedge a light squeeze over top then stir to chill and combine. Garnish with a lemon wedge, cherry and a Fireball, or another kind of cinnamon candy. Enjoy this spicy-sweet cocktail with caution, as it has been known to make you oblivious to the flirtations of others.

Make it a Mocktail:
Get the same refreshing jolt of spicy and sweet while still keeping a clear head. Simply substitute the cinnamon whiskey for half a teaspoon of cinnamon extract, available at most any grocery store. Stir to combine and plan your next battle, be it a tactical affair on the battle field or a frenzied Smash Bros Brawl.